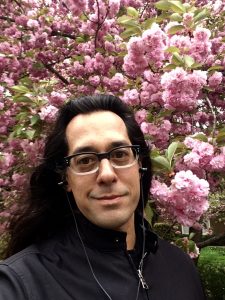 Are you reading anything that’s giving you insight or useful and usable distraction at this point?

Before I answer this, I feel like I need to say that my wife is a nurse and has already looked after several COVID-positive patients. And her hospital in Greensboro is in the process of becoming a COVID-only hospital, which as you can imagine, is a significant source of worry and concern. And my dear dear brother and his wife are critical care doctors in New York City, in the eye of the storm. My heart goes out to them each and every day.

Over the past several months, I’ve been working on a book chapter on social violence, race, and riot in British Black and Asian poetry, focusing on Bhanu Kapil and D.S. Marriott. I’ve found their experimental, avant-garde poetry incredibly sophisticated, compelling, and invigorating and I was on a real roll in my research until March, when (like everyone) I got massively sidetracked by everything.

Then my wife took her first positive patient two weeks ago. On that day, I decided to throw myself back into my writing and research as a way of refocusing my energies. Marriott’s most recent collection, Duppies, is heavily influenced by a London-based underground music called “grime” and I’ve been reading all about it in Dan Hancox’s excellent social history, Inner City Pressure: The Story of Grime (2018). Some folks may be familiar with grime as it has come into the mainstream since 2016, with grime MC’s such as Wiley being awarded a “Member of the British Empire” (MBE) by Prince Harry and another, Dizzee Rascal, performing at the 2012 Olympics. Leading up to the Brexit election in 2017, there was even a twitter campaign #grime4corbyn to get out the vote.

In the early 2000s, though, grime began in the public housing tower blocks of East London and North London, produced by black youth with no formal musical training. They composed rapid-fire lyrics over tracks at 140 beats per minute, broadcasting their compositions on pirate radio stations in bedrooms, kitchens, and rooftops and circulating their music through mixtapes. They held spontaneous raves and sold records out of the boots of their cars as well as in small record shops.

Inner City Pressure is a fascinating read on the music’s imbrication within the systematic underdevelopment of London’s economically deprived areas confronting day-to-day racial profiling and over-policing, gentrification and poverty, and mass surveillance and demonization by the press and politicians. Against overwhelming odds, grime artists adopted a DIY practice, creating tracks on low-end cheap technology such as software on Play Station 1 and karaoke machines. The music unapologetically embraces an aesthetics of violence and a politics of refusal before truly menacing social and political conditions.

The music of grime was also an active participant in and respondent to London uprisings. For instance, in 2010 riots erupted when tens of thousands of students took to the streets after Prime Minister Cameron tripled tuition costs and slashed weekly government subsidies for low-income teenagers. During several weeks of protests in Parliament Square as riot police closed off a barricade, protestors broke out make-shift sound-systems, blaring grime, occupying space, and antagonizing police. After the police murder of Mark Duggan in 2011 in Tottenham (who was well known by grime artists from the area), several grime MCs took to twitter announcing the riots and documenting the violence through their music. In any case, it is a very powerful, violent, and unruly art form.

Having just finished Hancox, I’m now very excited to see how Marriott absorbs and transmutes grime to suit his own poetry on race, violence, and riot. Marriott is also heavily influenced by postcolonial theorist, Frantz Fanon, who has been a foundational figure in Afropessimism. Fanon, I need to add, died of double pneumonia at Johns Hopkins hospital after fighting on behalf of the Algerian resistance against French colonial rule. So it has been particularly poignant returning to Fanon by way of Marriott in the current moment of crisis and urgency.

How about music? Films?

I’ve been really enjoying the Showtime/Netflix series, Penny Dreadful, which takes place in fin de siècle London: it’s kind of gothic/horror but features literary characters—Victor Frankenstein, the Creature, Dracula, Dorian Gray (my hero), Dr. Jekyll/Mr.Hyde—without any regard for chronology. It is all about subverting the authority of creators over creation, plunging everyone into unruly darkness. For a lover of literature, it’s delicious.

Over the past few years, I’ve come to really love house and techno, at least in its more melodic forms but I have also gained an appreciation for deeper, driving techno. My favorite DJ, Joris Voorn, is based out of the Netherlands. His hour-long “Tomorrowland Friendship Mix” is really, really pretty: https://soundcloud.com/tomorrowland/tomorrowland-friendship-mix-joris-voorn

But I also want to make a plug for Voorn’s recent remix of “Upside Down” by the English indie rock band, The Editors. He produced this back in February, before COVID blew up in Europe and North America, but it was released on March 20th. In dark times, when our world truly has been turned upside down, the lyrics “But I’ll hang with you” seems all too poignant. It’s gorgeous: https://soundcloud.com/pias/the-editors-upside-down-joris-voorn-remix

What is the best website, twitter feed, or other source of information, humor, insight, or distraction that you’ve found lately?

I’ve severely limited my consumption of news to maybe 20-30 minutes a day, tops, but when I do it’s The Guardian, Common Dreams, Alternet, Viewpoint Magazine, and Commune Editions. The Instagram accounts “allfails” and “doggosdoingthings” have been a welcome distraction. Honestly, SoundCloud has been my distraction-of-choice: all the music, all the time.

What do you miss the most about being on campus?

I miss the pop-ins and social interaction more than anything else (obviously): running into my colleagues and current or former students and the impromptu lunch or happy hour, especially now that spring is here and we could sit outside at Shorty’s for sparkling wine or rosé.

Meetings of every variety. Except the Graduate Committee meetings: we’re a really fun and irreverent bunch.

What research, scholarship, or academic meetings have you had to cancel or miss?

Ugh, the American Comparative Literature Conference (ACLA) was cancelled in mid-March (rightly!). But I was very much looking forward to that and my seminar was on “Queer Pragmatics.” My paper was on literary masochism in Bernardine Evaristo’s The Emperor’s Babe, which is a joy and I highly recommend for a fun, irreverent, ripping yarn on a young Sudanese girl in Roman London in 211 CE who ends up having an affair with Septimius Severus, Rome’s “African Emperor.” It’s Sex and the City meets Virgil.

What’s been the biggest challenge about working at home?

It’s honestly been a joy. I only use my Wake office for office hours and preparing for class and typically work from home. Oh, one thing is that I’m a night owl by disposition. So I’ve had to set an alarm to remind myself to go to bed before 3 am. Other than that, working from home has felt pretty natural, I’m happy to say.

Picked up any new skills or hobbies, or revisited any old ones? (Zoom doesn’t count as a skill)

Let’s just get this out of the way: I cannot stand Zoom (and all of the virtual platforms). It frequently feels forced. It bores me to tears (no offense anyone) because all of the things we typically discuss—where we’ve eaten, what new bar we’ve checked out, what music event we’ve seen, where we’ve traveled or where we’re going—are all off limits. So we end up talking about “The Event of Our Day” and even when we avoid talking about it, we’re still talking about it in silence. And Zoom and its brethren are a constant reminder of our lack of physical contact, which is depressing. Ok, now . . .

Slowness. Nothingness. Idleness. These are hard-won hobbies and finely cultivated aesthetic-cultural-political-social-ethical practices. One of the things I repeatedly try to impart to my students at all levels, from first-year seminars to graduate seminars, is the art of what the Italians call “dolce far niente”: the sweetness of idleness or the joy of doing nothing. By this I mean, yes, do your work and get done what you need to get done. Be active in your community in causes of social and political transformation. But carve out time for yourself entirely free of work because work is not life and the job doesn’t love you back. For me, this has been the pleasure of sitting on the deck in the morning over coffee and seeing the leaves slowly bud with each passing day. Writing for a few hours then taking six-mile runs and enjoying the outdoors, even in cold and rain. And sitting on the back deck at the golden hour, listening to the birds and waiting for the passing of a dozen deer through our backyard along what we call “The Deer Highway”: we have our pathways and they have theirs. As you can tell, I really enjoy house and techno music and I love spending four hours listening to a set while cooking, taking my sweet time every step of the way. And as fast-paced as the music can be, it is structured by repetition and extended duration, stretching out time, suspending and elongating experience. I am here for that.

Complete the following: “I can’t wait for summer, because then . . .”

As my friends, family, and colleagues know: summer is my natural habitat of decadent indulgence. My wife and I typically spend the non-academic calendar in Rehoboth Beach, Delaware which we feel is our true home. My summer routine typically consists of writing until 2-3 pm, biking into town, running a 5k on the beach, crushing 150 push-ups, swimming a mile in the ocean, before sliding into happy hour at my favorite outdoor biergarten, The Purple Parrot (which I call “The Faculty Lounge”) and then heading home and cooking a light dinner of fresh fish and vegetables before heading back out for late night karaoke and dance parties, only to round it all out with a Wawa meatball sub at 2 am.

I highly doubt whether any of that will be possible this summer as we will likely need to continue social distancing until there is at least a month without new cases and then universal testing and a vaccine. (With my wife continuing to look after COVID patients, I am being especially vigilant in maintaining isolation.) That said, if they re-open the beaches, I will be immensely grateful simply to swim. After all, with this new reality there are only three days in the week. Yesterday. Today. And tomorrow. If nothing else, it will be a time of mellowness as we all continue to slow down and embrace the now.