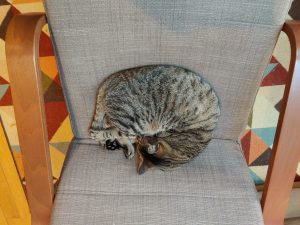 Are you reading anything that’s giving you insight or useful and usable distraction at this point?

The Book of Strange New Things by Michel Faber. A Christian missionary travels to another planet to minister to an alien race. He receives letters from his wife back on Earth as it rapidly deteriorates. Could be a run-of-the-mill novel about a man whose faith is tested, but Faber’s insights are wonderfully weird and surprisingly moving.

Ride a Cockhorse by Raymond Kennedy. Set during the financial crisis of October 1987, its anti-heroine Frances “Frankie” Fitzgibbons uses Trump-like rhetoric to take over a bank in a small New England town. Hilarious and frightening.

Comrade: An Essay on Political Belonging by Jodi Dean. The arguments and critique of neoliberalism are brilliant, I think, and the book is not without humor or hope.

How about music? Films?

My husband, Ryan, makes amazing Spotify playlists. He’s made four for the month of April. They are insightful, inter-textual, carefully curated and cathartic. They’ll move from Bauhaus to The Langley Schools Music Project to Kim Fowley to Ted Hawkins to Wussy to Purple Mountains. I love them.

Also still listening to Destroyer’s latest, Have We Met. “Just look at the world around you. / Actually, no, don’t look” from “The Raven” is too suited for this moment. Ryan and I were at a Destroyer show at Cat’s Cradle when we got the email that WFU was going to move online for the rest of the semester. It will be our last concert until… who knows?

As far as film and TV go, I’m trying for a mix of high and low culture. I’ve watched Tiger King on Netflix and watched the brilliant Mikey and Nicky, written and directed by Elaine May, on the Criterion Channel. I watch a lot of old Anthony Bourdain shows (No Reservations and The Layover) on PlutoTV. I still miss him.

What is the best website, twitter feed, or other source of information, humor, insight, or distraction that you’ve found lately?

As many are, I’m trying to limit my time spent reading news and scrolling on social media. Political shows I watch pretty regularly on YouTube are The Hill’s Rising, Useful Idiots with Katie Halper and Matt Taibbi, and Some More News. I listen to podcasts, too — Chapo Trap House and Intercepted are a couple.

What do you miss the most about being on campus?

The people, of course, are what I miss most. Conversations both serious and silly. Other things… the big Justin Duerr illustration in my office. Also, this is very superficial, but I actually like dressing up for work. I miss that.

Getting angry when students park in carpool spaces. Silly, I know.

What research, scholarship, or academic meetings have you had to cancel or miss?

I was supposed to attend the CHCI Health and Medical Humanities Network’s Summer Institute, “Space, Place and Design in the Medical and Health Humanities,” in June at the University of Southern Denmark.

The institute has been tentatively rescheduled for June 2021. Fingers crossed.

What’s been the biggest challenge about working at home?

Keeping a schedule when the days seem to flow into the next. I often work from home for a day at a time in the summer, so I’m used to it, in a way, but for a discreet amount of time. This is definitely different.

Picked up any new skills or hobbies, or revisited any old ones? (Zoom doesn’t count as a skill)

I write fiction, and while I consider my work much more than a hobby, I have been using this time to make a more dedicated commitment to writing every day. It’s actually going pretty well, surprisingly.

As far as new hobbies, I’ve been making cartoony animal figures with modeling clay. It’s fun and gets me out of my head.

Complete the following: “I can’t wait for summer, because then . . .”

I don’t really like the summer that much. As a staff member, I still work fairly regular hours in the summer, though schedules do become even more flexible. I’m not a fan of the heat and I’m not an outdoorsy person (sadly). What I look forward to most in the summer is traveling, and that won’t be happening any time soon.