On October 18-19th, Wake Forest University hosted “Movements and Migrations: A Conference on The Engaged Humanities,”sponsored by the Andrew W. Mellon Foundation and organized by the Office of the Dean of the College and the Humanities Institute.

The conference explored how humanities scholarship and teaching can engage with various public dimensions of material, real-world problems.

Dean Franco, Director of the Humanities Institute and Professor of English, opened the conference by welcoming the attendees and introducing WFU Provost, Rogan Kersh, who gave opening remarks that provided a bit of history on the grant from the Andrew W. Mellon Foundation that made the conference and the work it celebrated possible. 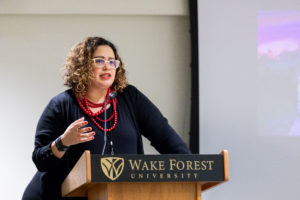 Yarimar Bonilla, Associate Professor of Anthropology and Caribbean Studies at Rutgers University, gave the opening keynote address, “American Disaster(s): Race, Empire, and Emergency in Puerto Rico, USA.” Bonilla’s talk discussed her work on the politics of recovery in Puerto Rico after hurricane Maria and the forms of political and social trauma that it revealed. She was recently named a Carnegie Fellow for work on her second book, Shattered Futures, on the same topic.

Bonilla’s keynote was followed by a panel discussion featuring Miles Silman, Andrew Sabin Family Foundation Professor of Conservation Biology and the Director of the Center for Energy, Environment, and Sustainability, Justin Catanoso, Professor of the Practice in the Journalism Program, and student panelists, Stephen Bechtel and Ellie Bruggen. 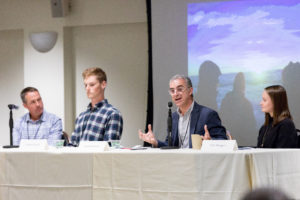 The panel was moderated by Eric Stottlemyer, Associate Dean for the Engaged Liberal Arts and Associate Teaching Professor in the Writing Program. Silman and Catanoso discussed their team-taught course held in Peru that allows students to develop technical knowledge in biology and communicate that knowledge through writing for a public audience. Bechtel and Bruggen reflected on their experiences during the course and how to integrate what they learned into their daily lives on campus upon returning. 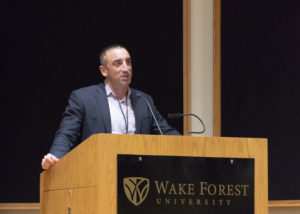 The first evening of the conference concluded with a screening of the film, Water Like Stone, a documentary portrait of Leeville, a small fishing town struggling to survive as the surrounding wetlands vanish.The screening was followed by a Q&A session with special guest and co-producer of the film, Michael Pasquier, Associate Associate Professor of Religious Studies and History and the Jaak Seynaeve Professor of Christian Studies at Louisiana State University. David Phillips, Associate Professor of Interdisciplinary Humanities and Women’s, Gender, and Sexuality Studies, served as moderator.

The second day of the conference opened with a panel discussion that highlighted the recent curricular achievements by faculty and students who recently participated in Mellon-funded engaged humanities courses. 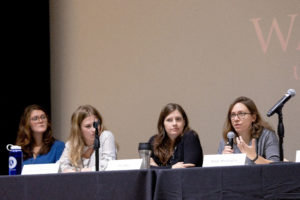 Lisa Blee, Associate Professor, and Penny Sinanoglou, Assistant Professor, both from the Department of History and their students, Reilly Marshall and Amanda Rosensky, discussed the work conducted with their course on refugee resettlement. Ulrike Wiethaus, Professor of Religion and American Ethnic Studies, described The Re/Moval Project: Against Forces of Forgetting, Choose the Power of Remembrance, an engaged humanities project featuring local and national faculty and select student work of REL392/692/ANT391, the course Wiethaus co-teaches with Andrew Gurstelle, Academic Director of Wake Forest University’s Museum of Anthropology. 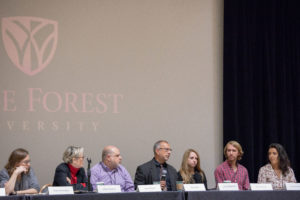 Mark Rabil and his student Josey Newman talked about their work on narrative and Law in a course Rabil co-teaches with Phoebe Zerwick, Director of the Journalism program. David Phillips, Associate Professor of Interdisciplinary Humanities and Women’s, Gender, and Sexuality Studies and his students, Peter Schlachte and Cameron Waters, outlined the research and work involved with the course on interdisciplinary studies of waterways and landscape that Phillips taught with Judith Madera, Associate Professor of English. The panel was moderated by Eric Stottlemyer. 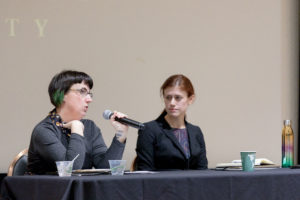 Following the panel, special guests Sarah Jane Cervenak, Associate Professor of Women’s & Gender Studies and African American Studies at the University of North Carolina at Greensboro, and Rebecca Evans, Assistant Professor of English at Winston-Salem State University, each gave papers on their work that explores the intersection of literature and public identities in political space. Dean Franco moderated their conversation. 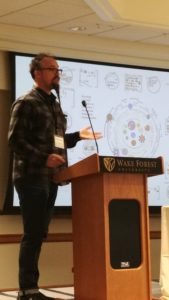 Migration: A Strategy for Indigenous Climate Justice” was given by Kyle Powys Whyte, Timnick Chair in the Humanities and Associate Professor of Philosophy and Community Sustainability at Michigan State University. Whyte is a leading authority on climate policy and its effects on native peoples. A lively Q&A followed his lecture.

The conference concluded with closing remarks by Michele Gillespie, Dean of the College. Dean Gillespie invited the attendees to reflect on what they learned over the two-day event, and she challenged WFU faculty in particular to think about how to direct this knowledge and passion toward projects that will be supported by the new grant received from the Mellon Foundation in August 2018.