Masha Gessen Visits WFU, Wrapping up HOW WE KNOW/WHAT WE KNOW Series

Masha Gessen Visits WFU, Wrapping up HOW WE KNOW/WHAT WE KNOW Series 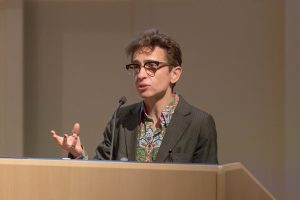 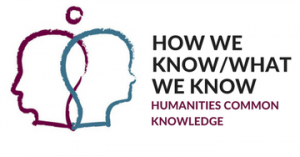 The HOW WE KNOW/WHAT WE KNOW series kicked off in October with Keyword Crossings on October 10th in the Second Floor Atrium at Wake Downtown. Faculty participants included Amy Catanzano (English), T.H.M. Gellar-Goad (Classical Languages), Staci Hepler (Math and Statistics), Pete Santago (Computer Science), and Timo Thonhauser (Physics). Faculty explored their methods for discovering, dealing with, and sustaining uncertainty as a necessary part of their scholarly work in Math, Classics, Literature, and Physics, and they spoke of the intellectual pleasures of confronting unknowability. 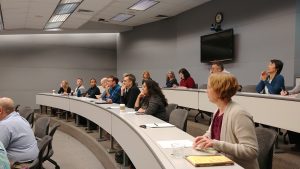 WFU Faculty attend Knowledge and Uncertainty Across the Humanities: A Humanities Disciplines Symposium.

The themes of these conversations continued at Knowledge and Uncertainty: A Humanities Disciplines Symposium on Monday, October 16th. A full house gathered in DeTamble Auditorium to hear five-minute presentations from Emily Austin (Philosophy), Jay Curley (Art History), David Lubin (Art History), John Oksanish (Classical Languages), Penelope Sinanoglou (History), Kendall Tarte (French Studies), and Rebecca Thomas (German & Russian). The presentations wrestled with questions regarding what constitutes knowledge across humanities disciplines, how knowledge is made or un-made, and whether specific disciplines matter (or even if they should). The presentations took on timely topics like the meaning of the word “eudaimonia” and the ways in which art history can create discussion around the problems of confederate monuments. A response from Herman Rapaport, Reynolds Professor of English, followed the presentations and led to a round table and audience discussion. Faculty were given a chance to continue these conversations informally at a reception in the First Floor Lobby of Tribble Hall, provided by the Provost’s Re-Thinking Community initiative.

Two HWK/WWK events were not directly sponsored by the HI, but they also explored many of the same questions with which the series sought to engage. On October 19th, the Humanities Institute co-sponsored the English Department event, Community in the Age of Riots, in which Professor Joshua Clover of UC Davis gave the lecture, “Method & Commune,” in DeTamble Auditorium. Clover engaged with faculty and students at a reception after the talk to further discuss his scholarship, poetry, and activism. On Friday, October 27th, Jessica Richard, Associate Professor and Chair of the English Department gave the lecture, “Cultivating Virtue in the University: Teaching Jane Austen’s Pride and Prejudice at Wake Forest” as part of WFU’s 2017 Family Weekend. 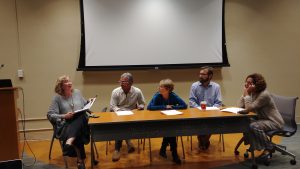 As stated above, the HOW WE KNOW/WHAT WE KNOW series concluded with a visit from journalist and author Masha Gessen. Gessen spent two days on the Wake Forest University campus and met with students, faculty, and staff at several events throughout her stay.

She met with WFU Journalism faculty and students on Monday, November 6th in Tribble Hall. You can click here to read more about this event in Jordan Green’s piece, “Citizen Green: Masha Gessen and the elusive quest for truth” in Triad City Beat.

During the afternoon before her lecture and public interview on November 7th, Gessen had lunch with students, faculty, and staff where she talked about many topics, including her participation in several segments on Full Frontal with Samantha Bee.

Prior to Gessen’s visit, three reading groups met to discuss her book Words Will Break Cement: The Passion of Pussy Riot. The groups’ participants included faculty, students, staff, and community members and were facilitated by Angela Mazaris, Director of the LGBTQ Center; Aimee Mepham, Assistant Director of the Humanities Institute; and Pro Humanitate Institute staff Shelley Sizemore, Kaylan Baxter, and Sylvia Oberle. Gessen took the time to meet with participants from all three groups in Tribble Hall on the afternoon of the 7th to discuss the relationships between art and political action, manipulations of language, and the status of the art collective Pussy Riot. 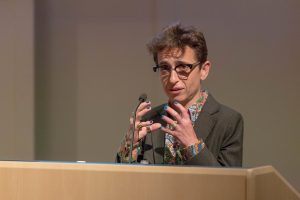 The visit concluded with Masha Gessen: Democracy in the Age of Trump and Putin. Gessen delivered a talk to a standing room only crowd. Her lecture revisited her 2016 piece, “Autocracy: Rules for Survival,” published almost exactly one year ago in The New York Review of Books. Gessen revisited each one of the rules throughout her talk, discussing how her feelings on each of the issues have changed or remained basically the same. Gessen published a piece in The New Yorker the next day that features many of the same questions and insights from her talk. You can click here to read the piece in its entirety.

After her talk, Dean Franco, Professor of English and Director of the Humanities Institute conducted an on-stage interview with Gessen, discussing Gessen’s experiences and thoughts on contemporary journalism, as well as the abuses of language and rhetorical similarities between Donald Trump and Vladimir Putin. Click here to read the coverage of the event from the Old Gold and Black. 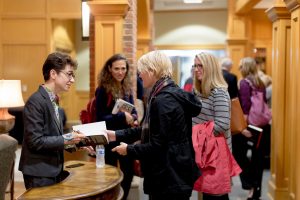 After the event, Gessen met with members of the audience as she signed copies of her books in the Byrum Welcome Center lobby, including her newest, The Future is History: How Totalitarianism Reclaimed Russia, which would go on to win the National Book Award Winner in the Nonfiction category the following week.